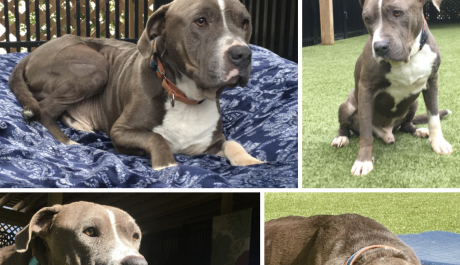 Your donation will help SPIKE recover.

Lovable SPIKE has had a bad couple of weeks.  He has been in and out of the Hospital and Veterinary Hospital for various medical issues.  He started getting patches of what appeared to be Ringworm, but they were not.  The patches were inflammatory cells that did not have any cancer components but were very reactive.  We did a biopsy to make sure we were not missing anything, and they still came back inflammatory.

His skin had just begun to improve when he suddenly started losing weight and refused to eat.  He developed pancreatitis, and we had to put him on a strict fat restricted diet to heal his GI System.  Once we got him through this, he became very lethargic and not his happy go lucky self.

Spike's condition is volatile on a good day, but for the most part, he is happy and loves to interact with everyone.  He enjoys playing with his ball, and when he does not, we know something is going on.   Spike's diagnosis of GME (granulomatous meningoencephalitis) is becoming more pronounced each week.   He has to be on prednisone to keep the inflammation down, or his quality of Life is not good, and he cannot function.   GME is an inflammatory disease of the central nervous system (brain and spinal cord).

We have treated lots of dogs with GME, and each one responds differently to the medications.  There is no cure for the disease, only medications that allow the animal to maintain a good Quality of Life.   Each medication has complications and side-effects which have to be addressed.   One of the side-effects of the prednisone is loss of muscle mass.   We can exercise and do Physical Therapy with Spike, but the head is one area we cannot stimulate muscle growth.

Spike's appearance is more sunken-in around his eyes.  He has lost a lot of the fat and muscle around that area.   We don't think it is time to say Good-Bye to Spike but wanted everyone to know what is going on with him.  He is closely monitored by his Specialists and Us.  When Spike goes to the Hospital, we stay with him so he can come back to the place he is most comfortable which is the Rehab Center.

We Love and Adore this dear boy.  He has had a terrible break in Life and just about the time the bad is behind him, the GME develops.   Spike started out not wanting to get up or eat this morning, and after he saw his Specialists, he was much brighter and wanted to play and eat his normal amount of food.   We are closely monitoring him and making sure any tests they need to run are being done.    Controlling the amount of drugs in his system is critical for dogs with GME.

Please, keep Spike in your Thoughts and Prayers.   Donations would be greatly appreciated to help with his on-going Medical bills.   Thanks for caring about this sweet boy.  We pray he improves so he can enjoy more of the unconditional Love and Care he is showered with daily.