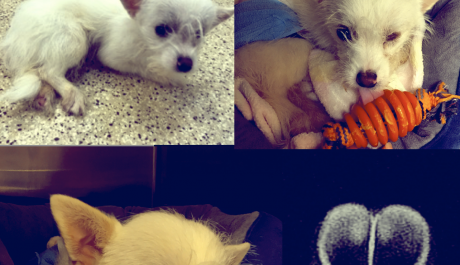 COLUMBIA, SC.....we probably see more pups with brain and spinal injuries than most rescues.  We see a lot of Hydrocephalus pups that are scheduled to be put to sleep.  A lot of the young pups that have fluid on the brain will outgrow the condition, and the rest will require surgical intervention.  Hydrocephalus does not have to be a Death Sentence.   Most people give up and drop these adorable pups off to an Animal Control Facility and have them put down.  That was going to be the fate of adorable Angel.

We were contacted by another Rescue Group that I had worked with before.  The had stepped up for a puppy that was going to be put to sleep that had Hydrocephalus. Angel was unable to walk and the person that had him had small children that carried him around all day.   I had medical info, and pics sent and had Angel taken to our wonderful Neurologist, Dr. Bob Bergman at Carolina Veterinary Specialists in Matthews, NC.  I was not going to have this pup put down without seeing if we could give him a better outcome with a good quality of Life.

Angel arrived and was greeted with open arms from all the Neuro Vet Techs that swoon over every pup we have ever sent to them.  This pup was no different.   Each one took turns going over him and then giving him a well-deserved bath.  Angel is a one year old Westie Mix that has some genetic deformities.  Aside from his obvious Hydrocephalus, he has a deformed front leg that is all curled up and non-functioning, and he is missing an eye.   Dr. Bergman ordered an MRI so he could see the extent of the fluid in the brain cavity and to also rule out any brain tumors that could also be causing the fluid build-up.

Angel's MRI showed us a perfect heart-shaped brain cavity filled with fluid.  His other eye was seen on the MRI but is back further and is not functional.  No tumors were found, but it was discovered that Angel has Atlantoaxial Subluxation.  Atlantoaxial instability is not common in dogs.   Angel has abnormal movement in the neck, between the atlas (C1) and axis (C2). This instability allows abnormal bending between the two bones, which causes compression of the spinal cord.   Dr. Bergman felt a lot of his inability to walk was from the C1 & C2 Subluxation.

After going over all of his medical issues, Dr. Bergman felt the Hydrocephalus should be closely monitored, but his immediate concern was his neck issues.  He needed surgery to stabilize his neck and stop the spinal cord compression he was having.  I was hesitant at first but decided to follow my gut and give this adorable pup his ONLY chance at ever walking.   All it took was one look into the Heart and Soul of this amazing little puppy, and I knew I had to fight as hard as he had been fighting.

Dr. Bergman spent several surgical hours stabilizing the area that had been compressing his spinal cord.    Angel was out for most of the day and night.  The following day he spent curled up in the Vet Techs arms being closely monitored.  By the third day, he was beginning to show progress and was moving better but was still very unstable.   Compared to how Angel arrived, he had shown great improvement.  He could not hold his head up at all and had no concept of how to walk when we first got him.  He was now able to hold his head up for short periods of time and was starting to hop a little.

Angel has a lot of Rehab ahead before he will be able to walk.   We are committed to this adorable little Angel and are going to do whatever it takes to give him a great Life.   We are closely monitoring his Hydrocephalus and will put a shunt in if his Neurologist thinks he would benefit from the procedure.   In the meantime, his Neurology Team is showering him with Love and monitoring his progress to make sure he does not go backward.

The procedure we thought we would be doing has turned out to be something totally different.   You never know what you might find if you do not do the diagnostics required to make an informed diagnosis.   Too many people give up and stop short of getting a diagnosis.   They start thinking of all the reasons why to put an animal down instead of looking for reasons why to keep an animal ALIVE.

Being Perfect is highly over-rated, and a lot of the genetic problems we see in dogs are from over-breeding and trying to perfect a genetic pool.  These animals are living, breathing creatures that feel and love.   They are not experiments meant to be discarded when the outcome is not what was predicted.    Angel may not be perfect to anyone else, but he is pretty darn perfect to us.  He is one of the happiest pups you will ever meet.  The amount of Love this tiny pup has for everyone is Heart-Breaking.   He has so many parts that don't work but according to him, he is perfect just the way he is and we agree.

When we first rescued Lamb Chop, we thought she would be walking in a couple of weeks.  It took us almost two years and lots of procedures, but she finally was able to walk on her own and is living an incredible Life with her Family.  Our hope is that Angel will have the same outcome.   We are just at the beginning of saving sweet Angel.  We haven't even begun to take care of his Hydrocephalus because she had to have surgery to repair her Cervical Spine.   Please, Donate toward his Life-Saving procedures so we can continue his Medical Care just like we did with Lamb Chop.

Thanks for caring and making his Journey to Heal and find Love, possible.  We greatly appreciate your love and support.