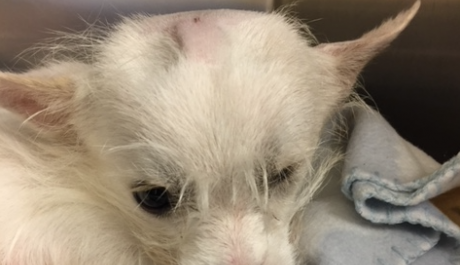 Adorable ANGEL had to be rushed to the ER in Charlotte where his Neurosurgeon is.  Our sweet little boy had been doing amazing.  He hops all over the place and plays with his toys.   He is one of the smartest little pups for one that has so many disabilities.   Dr. Bergman was elated when he last saw him and could not believe the progress he had made.  He still had hydrocephalus, but it was not hindering his ability to enjoy Life.   When we first got him, he would cry all the time and could not take one step without falling over.

He no longer cries from his headaches, and he will bark just like any other dog when he wants your attention.    He loves being held and will curl up in your arms all day if you let him.   When one of our Staff came in early to check on the dogs, she immediately noticed something was wrong with Angel.  When she picked him up to see what was wrong, he let out a yell and did not want to be handled.   She then noticed the hydrocephalic fluid bump on his head was deflated and he was damp all over.   I was contacted, and we immediately took him to the ER.

I spoke to several Neurosurgeons while he was en route to the hospital and they each agreed if the fluid had somehow drained off his head, he would probably be dead because of the sudden drop in pressure.   Puppies like Angel have a very soft area on the top of the head.  The brain membrane wall is very delicate there because it did not develop properly.  The soft spot on the head will always be that way even when the fluid drains away.

Dr. Bergman did not put a shunt in when he did his procedure because he felt the pressure was fine in Angel's head.   Shunts have a long list of complications that come with them so putting one in is a last resort only.    Once Angel arrived and was checked out, they determined he had an ear infection, but that did not explain the lack of fluid in his brain.  I was having a fit because the main issue was not being addressed.    NO ONE seemed to be paying attention at the hospital.

Everyone knows how much I Love Carolina Veterinary Specialists in Matthews, NC but this time was a totally different experience.  I spoke to the ER Vets, Vet Techs and they were not interested in the FACT this tiny pup was RUSHED to the ER because the fluid in the brain had drained off.   The top picture of Angel is how he was the day before, and the bottom is how he was 12 hours later.   I was so upset by their lack of concern for what had happened that I was going to go and pick him up to take him somewhere else that had a Neurologist.

I finally was able to talk to the Neurologist that was on call for Dr. Bergman and explained the situation.   He was not aware of the pictures that had been sent up early in the morning, and NO ONE had told him about my concerns. FINALLY, someone was paying attention.  Once Dr. Quigley saw the pictures; he knew immediately something had happened and the fluid had definitely drained off his head.   All of our animals have cameras watching them 24 hours a day.  Even when the Staff is there, the cameras are still on.   I am able to go back and look at the videos of any animal or person at the Center for 30 days.

I went back and looked at Angels video while he was sleeping, and there was no indication of him having a seizure or anything that would have caused this.  He did not have any trauma of any kind.  I also went back and studied the videos of him during playtime, and nothing happened during that time.   When I spoke to Dr. Quigley, I told him there was a rust-colored spot on the back of his head and asked him to shave that area to see if he could find anything to explain this.   He found a tiny hole where it appears the fluid had drained out.

Today and tomorrow, they are doing tests to determine what happened.  The hole is so tiny it had already sealed itself shut.  The brain cavity will slowly start filling up with fluid again.   We now have to determine if Angel will need a shunt put in to regulate the pressure.  If the pressure got too high, that would have caused an area to expand, and a leak could form to relieve the pressure.

In the meantime, Angel is running up quite the bills while we are determining what has to happen next to prevent this from ever happening again. We need DONATIONS, and we need them NOW.    We are getting in very little in Donations for the animals we have.  I do not know what animal everyone is waiting to come along before they Donate.   We will not be in business to take in that animal if funds do not start coming in.

I have worked tirelessly for ten years for FREE to build a place that I have put my money in to make sure these Abused Animals have a place to go when they get out of the Hospitals.  A place where our Hospice Patients can live out the remainder of their Life in a loving Home environment until their time comes.  I am still working on this Project for the Animals.  When we do not raise the funds we need for the animals, I am the one that pays them.

If Funds DO NOT start coming in, we might as well close our doors.    There is no place in the Country that does what we do.   All the pups like Angel would be EUTHANIZED because no one is going to spend what we do to save them.   Imagine a World without Winston, Levi, Lambchop, Bubbles, and Mercedes.  I could go on for days with all the amazing animals we have saved over the years.   Please, DONATE and if you can't, then tell your Friends and Family about us so they can Help the Abused Pups that need us the most.