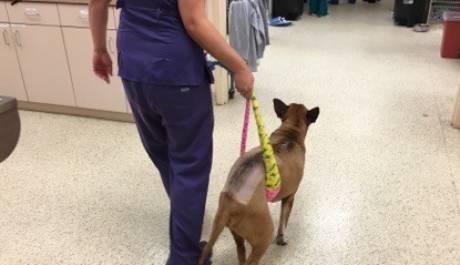 Your donation will help Bentley recover.

Our dear Bentley had to be rushed to Charlotte to have Spinal Surgery.  He was greeting his Family when they came home and stepped down funny and ruptured a disk in the lumbar region of his spine.  He let out a yelp when it happened but proceeded to decline over the next couple of days.  He was taken to his regular vet and given meds but continued to deteriorate.  We were contacted when he became paralyzed in his rear legs, and I had him immediately taken to the ER to get an MRI done.   Bentley did not have any deep-pain sensation and very little anal tone when he arrived the ER.

Bentley had been with us for years before we found him a perfect home with Dapple.  Bentley's scans were sent to Dr. Bergman in Charlotte and he agreed that he had to have surgery to give him the best possible chance of walking again.  Bentley's Owners did not want to go forward and wanted him to be PTS.   That is not a decision any Owner can make without us authorizing it.  That is part of our Adoption Contract to make sure each one of our animals always gets the best possible care, even after they are adopted.   I intervened and let them know that was not going to happen, and they took him to Charlotte for me.

Spinal Surgery in the lower Lumbar Region of an animal gives the animal a 50% chance of ever walking again.  Without surgery, it is 100% chance he will never walk again, and he will be in intolerable pain.   If he lives out his Life in a wheelchair and never walks on his own again, that would be just fine.   I would never put down an animal that is otherwise healthy.  Most of the animals we rescue would love to have a 50% chance of survival.   They are on Death's Door, and we do everything we can to give them that chance.  With us, we Win far more than we lose because we never give up, and the animals never give up.

Our dear boy had lighter fluid poured on him and torched when we originally rescued him years ago.  He then got Tetanus from an old metal collar he had on.  His Life had been a living Hell before we rescued him and he has done nothing but love everyone he meets.   He has already done the hard part which was surviving.   He will also get through this, and we will help him survive this last hardship.

Dr. Bob Bergman did surgery on Bentley late yesterday evening. During the procedure, he observed his spinal cord was intact and was not damaged from the ruptured disk.    He went in and cleaned out the ruptured disk and got out as quickly as possible.  Bentley is very comfortable now.  It will be weeks before we know what the outcome will be.  Bentley was trying to use his rear legs which is a good sign.   He is going to have to have lots of Rehab to give him the best possible chance.  He will remain in ICU through the weekend and then will start Rehab.

Accidents happen with animals all the time.  We see more spinal injuries that most Rescues because we help the dogs just like Bentley that have been abandoned and no one wants them.   A Spinal Injury is not a Death Sentence.   Give these dogs a chance.  The rest of their body is working just fine most of the time.  If their bladder has to be expressed, then you learn how to do it, and you move on.  Paralyzed dogs matter and can have great lives.   If Bentley can't walk on his own, then we will get him a Custom Cart.  Bentley has done the hard part; now we just have to help him one more time.

Bentley's bills at two ER facilities are through the roof.   Please, help us with this dear boy.   His bills are going to keep on coming while he is in ICU and then for Rehab.   Any Donation is greatly appreciated.