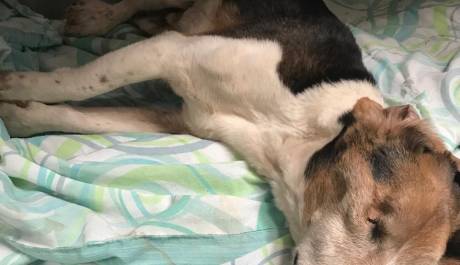 EMPORIA, VA......Sweet Jack is a 7-year-old Beagle that wandered up to someone's home emaciated, starved and barely able to walk.   A rescue stepped up to help him, but when he started having seizures, it became obvious this was far more than they could handle.

We were helping the Rescue with another dog that had Hydrocephalus.  They were bringing that dog down to Carolina Vet Specialists in Matthews, NC for us and once I saw Jack's pictures, I knew I could not leave him behind.

Jack came in with one eye and was all skin and bones.  He could barely raise his head and was in far worse condition than I ever imagined.  It looked like someone had hit Jack on the head at some point and possibly on his back.   His bloodwork had bottomed out in so many areas that I was surprised he was still alive.

The home he wandered up to said he was barely walking when he arrived and slowly went down on his rear legs and began to have seizures.  It took almost five days with Jack in ICU for the hospital to get him stable.   Dr. Bergman did a thorough Neuro. Exam and determined Jack needed an MRI which we approved for him to do.  There were lots of degenerative areas in Jack's spine, but the one that stood out the most was at T12-T13.

Dr. Bergman decided the only chance Jack had of ever walking again was to do Spinal Surgery (Hemilaminectomy) at T12-T13 on the left side of the spine.   It was a long shot but one we thought would give this sweet beagle the best chance possible.  We will not know if the surgery is a success for several months since there will be lots of Rehab and Physical Therapy during the next couple of months.

Jack has to have his bladder and bowel expressed because of his spinal complications.   We don't know how long he has had these issues, but it appears to be fairly recent since the Family said he was walking at one time and does have deep pain sensation.

Beagles are some of the sweetest dogs around.  All they care about is sniffing and chasing the next smell they pick up.   There is not a mean bone in their body which is why they are an easy target for Hunters to Discard when they get some age on them.  Someone has gone after Jack and beat him.  His head is a little lopsided, one eye is missing, and he is more scared of what is going to happen next than what is actually happening.

We are committed to this wonderful dog to give him every chance possible.  If he never regains the ability to walk again, we will get a cart made.    Beagles are known for being dramatic.  Jack has that part in spades.  If you look at him funny, he will start moaning and screaming as only beagles can do.

Jack may have a long road ahead to recover from his abuse.   The good news is that he is safe and is now getting the best Medical Care possible.   Love may not heal all of his past wounds, but it is a great start to a new beginning.   Please, DONATE whatever you can to cover all of Jack's Medical Care and his Spinal Surgery.  Thanks for caring and making his Journey to heal and Survive possible.