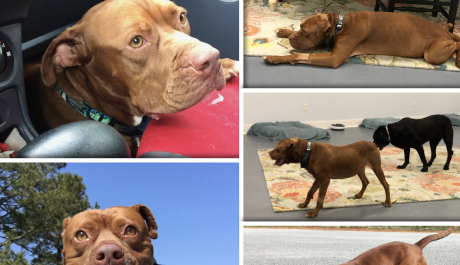 It is with incredible sadness, we have to let everyone know that dear Hooch has crossed over the Rainbow Bridge.   We knew this day was coming but were still hoping a cure of some sort would happen for this very special boy.   His Neurological function deteriorated over the last week, and it became more difficult for him to walk without his legs sliding out from underneath him.   There were times that he knew exactly where he was and other times that he struggled with understanding where he was.  Hooch and Dear Abby formed a special bond that seemed to calm this sweet pup down.   He no longer circled all the time and wanted to be in the room with Abby all the time.

It became harder for him holding going to the bathroom, so we took him out every hour like clockwork.  The minute we saw him pace or get that special Hooch look in his eyes we would get him outside.  Just the act of caring about him feeling like he did his best meant the World to this wonderful dog.  He would look into your eyes and allow you to wrap your hands around his face and give him kisses to show how pleased he was.

Dr. Bergman felt that Hooch had a degenerative condition called GME (Granulomatous Meningoencephalomyelitis) which is an inflammatory disease of the central nervous system.   Once the disease is diagnosed, it is usually advanced and cannot be reversed.  That was the case with Hooch.

There was nothing Hooch ever did that made us not love him or want to care for him the rest of his Life.   We would clean up after him, comfort him and shower him with unconditional love 24 / 7 if that was what he needed.  The problem was that there were some side-effects of GME that we could not overcome.  One of the main ones was him losing his ability to swallow.  If that happened, he would eventually aspirate fluid into his lungs and get pneumonia.  Hooch lost his ability to drink water, and we knew it was only a matter of time before he would start to panic and suffer.  We contacted Dr. Cifranick, and he came over and helped Hooch cross over The Rainbow Bridge in our Rehab Facility that had become his Home.

We had a Going Away Party for this sweet boy that made him feel like he was in Heaven.  He had Biscuits and Pork Sandwiches, Chocolate Twinkies and Ice Cream.   He was so excited about the food that he tried to eat the metal bowl when he was done.  He went for a short walk, came back in and lay down on his mat next to us.   His time had come, and he was ready to say Good-Bye.   His passing was Beautiful and Peaceful.   We looked into his eyes as he drifted off.

The hardest part of doing Rescue is knowing when to say Good-Bye to an animal you have loved and cared for.  Quality of Life is our top priority.   Hooch's Life with us was Joyful and Full of Love.  He never felt abandoned or Lost and always knew we were there to take care of his every need.

Our dear boy will forever be in the Hearts and Souls of everyone that knew him.   He is now running free with all the other pups that he got to know while at the Rehab Center that crossed before him.    Tonight when you look up at the Summer Sky look for the biggest Star that is going left and then going right and stops and then streaks across the Sky with pure Joy and Excitement.  That will be Hooch getting his balance back and realizing he is whole again.

Hooch has taken a piece of our hearts with him but what he has left behind is a Love that will help us through our darkest hours.  Thanks for helping us with this beautiful Soul.  We were honored to have found him the first time and were Honored to have been given a chance to Love him unconditionally in the end.  He will forever be part of Noah's Arks Rescue.