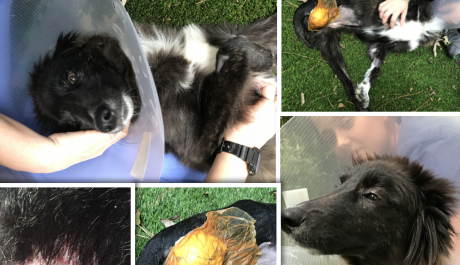 Adorable Tibby was doing incredible with her wound care and bladder infection until yesterday when her incision opened up. The minute that happened, she had to be rushed to CVRC in Charleston where her surgeons could address the area.  As you can see from the photos, the area that opened up is right below where her hip bone is.  Since Tibby's spine has twisted, a lot of pressure is put on that one area.  I don't think the area opened up because of constant pressure but because a stitch on the end came undone.

Tibby had staples, glue, and sutures in the area where her leg was removed because of the nasty bladder infection she had.  The site of the incision had to remain clean and dry with no chance of any bacteria getting in.  Tibby's staples had already been removed, but the stitches stayed in place to secure the area as an extra precaution.   Our fear was taking the stitches out too soon which is why we decided to extend the date of removal. Unfortunately, some of the stitches came undone on their own which is always a danger.

Surgery was done last night on Tibby and today to clean and debride the area.  Cultures were taken at that time.  A tie-over bandage was put in place, and the area was to remain open until the tissue granulated in.  The tie-over bandage is a simple, versatile bandage that has many applications in veterinary medicine. It can be used with a variety of dressings to cover wound configurations in different locations.  It is especially useful for covering areas that are otherwise challenging such as where Tibby's limb was removed because of her paralysis.

Tibby will have to remain in ICU until the area has granulated and there is no longer a risk of infection.   We hate this for Tibby because she has already been on strict cage rest since her amputation and is not allowed to play with the other pups.  Our little bundle of fur is all puppy and wants to play always. She gets lots of love and affection from us, but it is not the same for a puppy.

The lack of interaction makes us sad for her seeing how much she wants to get out and run around.   We have her next to other pups that she loves so she can at least lean against them.  It is not the same, but it is something to feel the warmth of another dog you love.  As you can tell from this note, we are really sad for dear Tibby.   If her wound had stayed together, she would have been running around in a couple of days.

I have been doing rescue for over fifteen years and have only had two cases where bilateral limb removal was necessary for the well-being of the dog.  The surgery was Life-Saving for Archer since he had developed a resistant bacterial infection that had gotten into his bones.  If we had not removed his remaining rear leg, he would not be here today.

Tibby's case is different because when a dog bit her, her spinal cord and legs were damaged as a tiny puppy.  As she grew her legs became a mangled, atrophied mess along with her tail.  On top of that, her spine twisted to compensate for the deformed legs   Her bladder and bowel control is lost but her ability to get out of the waste is the reason why she has the bladder infection. Tibby has incredible front muscle strength from dragging herself around.  That muscle strength is the reason why she will do so well once her remaining leg is removed.  By shifting her front legs more toward the middle of her body, she will be able to pivot forward and get out of the way of her own waste.  That is critical for a puppy like Tibby.

Tibby has a cart just like Archer and can run around playing for long periods of time.    They do not sleep in their cart and have long periods when they are out of it.  They wrestle and play just like other dogs, but they do it with their front legs.  Having the ability to run around on their front legs by pivoting forward and hovering their rear-end about two inches above the ground is remarkable to see and will be possible for Tibby.  We have to take what happens and get her better before we move forward just like we did with Archer.

We have learned so much from Archer and an animal's ability to compensate when paralyzed.   Archer's love for Life and his ability to move around in and out of the cart has taught us so much.  We have knowledge that can help us save more paralyzed dogs.   What used to scare us to death is now a part of Life at Noah's Arks Rescue.

We are going to get Tibby through this just like we did Archer.   With your Love and Support, we can save these precious pups that would have otherwise been euthanized.  Archer was six months old when we rescued him, and Tibby was only a couple of months.  They have the rest of their Life to run Free and be Alive.  At Noah's Arks Rescue, we do everything possible to give these precious pups a Fabulous Life.  We don't give up or give in when hardships happen.  We reach in, hold them tight and shout to the Heavens how thankful we are they held on until got there because we are NEVER going to let them down.  If all we can do is hold them for their last dying breath, we do whatever it takes for them to know unconditional LOVE.

Thanks for being our support system and helping us with these beautiful pups.    Tibby needs us now to get her through this.  Please, Donate whatever you can so we can give her the best possible chance.  The Surgical ER Team thinks Tibby will be in ICU through the weekend.  We will post updates as we get them.