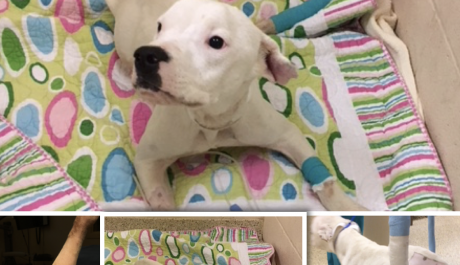 Sweet Archer doesn't even look like the same dog.   He acts like a dog that never had two rear legs.   He is so happy to be free of the main source of his infection and pain.  He may be paralyzed, but that does not matter to Archer.  He is Happy.  From the moment he was saved, he has had a smile on his face.  I am sure during the entire time he was suffering, he still thought Life was  Good.  Archers ability to see Good in Bad is the ONLY reason he is alive today.

Archer had his leg removed on Tuesday with Dr. Michelle Nanfelt.  Before the surgery, Archer's body was scanned from one end to the other.   He has fragments of the bullet that will NOT need to be removed because they are not near an artery, spinal cord or any major organs where they could travel and cause damage later.

Removing a leg of an animal is normally not a difficult task to do for an orthopedic surgeon.   The problem with removing Archer's leg is that he had been dragging himself around for a long time.  His body had compensated with the dragging by forming layer on top of layer of scar tissue that was inflamed.   I have enclosed a picture to show just how deformed and swollen the leg was at the area that was coming in contact with the ground the most.

Animals bodies can compensate by swelling to protect from further injury.   The process had gone on for so long with Archer that the leg had formed scar tissue that made it almost impossible to remove.   During the process of removing a leg, the surgeon saves enough viable tissue and muscle to form a flap that can be used to cover the area that is left.  That muscle and skin forms an area that protects the bony area that is left.

Archer's muscle and skin had been severely damaged from dragging himself around and was no longer viable.  Dr. Nanfelt said this was one of the hardest amputations she had ever performed because of the lack of viable tissue.  She was able to pull together enough muscle from surrounding areas, but it was not an ideal situation.  We are going to have to wait to see if what she created will be enough once his hip area heals.

We have ordered a Custom Kart for Archer.  Since he is a young six-month-old puppy, he will need another kart once he is full-grown.   The hospital is using a strap to hold him up to allow him to walk on his front legs.  He is used to dragging himself around so the Kart is going to be a Life-Saver that will give him back his ability to run and play once he has mastered it.

Sweet Archer is a fabulous, sweet loving pup that loves everyone he meets.  We have not seen any problems with any dogs that have walked past his hospital area.  He has had a horrible start in Life, but that does not have to define him for the rest of his Life.

Once he has healed from his surgery and his infection is gone, he will come to our Rehab Facility to learn how to live as a paralyzed dog.   Archer will get to be a Normal Dog in almost every way.  He will no longer have the urge to go to the bathroom which is why we have to be consistent.  Once he learns how to use the kart, he will get to run and play to his heart's content.  It usually takes lots of adjustments to get it right, but we are committed to Archer and will do everything possible for him to be Happy and Joyful.

Archer will be up for Adoption once he has adjusted to his new Life.  He will make an amazing member of a Household that is committed to his new Lifestyle.  Please, don't rule him out if you are looking for a new member of the Family.  He has limitations but is so worth the effort.  Thanks for caring and making his Journey to Heal and find Love, possible.