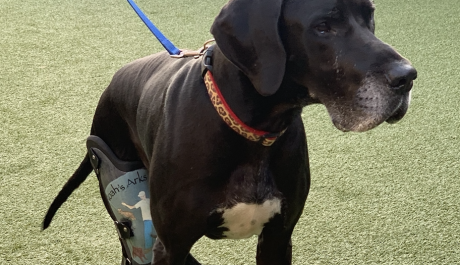 The time has finally come for Luke to get his prosthetic.  Derrick Campana has worked tirelessly to make three different prosthetics in hopes one of them would work.  He arrived late Wednesday, and we worked all day Thursday with his crew into the night.   Yesterday was a very long day for everyone, especially Luke.  I did not get home until late into the night and was exhausted.  Today was equally as exhausting which is why I am posting his update so late into the day.

The first prosthetic Luke hated.  It felt too foreign for him, and he was able to twist it off his leg.   I was scared to death. Luke was going to break his leg.   We tried several times but decided that particular one was not going to work.  The second one had potential, but Derrick soon realized we had to have his partial leg securely in a rubber type sock within the prosthetic for him to feel secure.  The third prosthetic had wonderful potential.  It had a rubber sock, and Derrick was able to move the straps further up his leg for great stability.

We finally got Luke's leg in the third prosthetic and waited to see what he would do.  He sat down and didn't want to get up.  We helped him up and allowed him to walk by leaning on us.  He still did not want to put the prosthetic leg down.  One of our Trainers walked in a reminded us that Luke is very treat motivated.  Once the treats came out, Luke forgot about his leg and soon began to walk toward the treats.

We then decided to take him outside on the Canine Grass to see how well he did on that.   He was motivated by the treats but was still holding the prosthetic up way too much.  I decided to throw the treats in the air to see if that got him to put his leg down.  Suddenly, Luke was airborn, and he had used his new prosthetic to push himself off.  We each cheered with excitement.  Derrick was still not convinced, but we were excited.

Luke pushed himself off his prosthetic all over the yard.   Each time he jumped, he got more confident with the leg.  We then took him for a walk outside the yards on the asphalt.  He followed the treats and walked as far as he could until he was exhausted.   Everyone was tired, and it was dark outside, so we decided to call it a day.   Luke has the entire Training Room to himself because of his size, and he was ready to go to bed.  He was really funny about wanted us to leave him alone.  He had his chew toys in his mouth, and he was set for the night.

When Derrick left this morning, he was excited about the progress Luke had made.   He is going to rework the other prosthetics and make some new ones with the information he gathered from the trial session yesterday.   Our sweet boy has gone from being starved to death to jumping and running.   This week we are going to do our best to get some good videos of Luke with his prosthetic.  We will be posting each one as soon as we get it.

Thanks for your patience and giving us the time we needed to get Luke fitted with the Master of Prosthetics, Derick Campana.