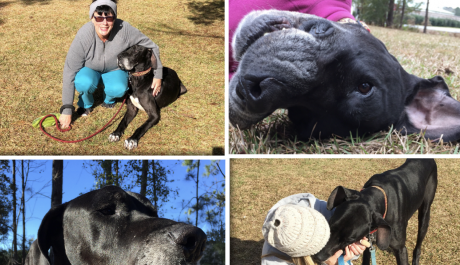 Sweet Luke is doing fantastic.  He has gained most of his weight back and will now begin to increase muscle mass.  He is strong as an ox and proves that to us every day on his walks.   Wherever Luke wants to go, he gets to go because he is so big.  The good news is he usually pays attention to us because we have the Treat Bag.  No Treat Bag, and he is running the show and will do whatever he wants.

Luke has quite the personality.  He has no clue he is a big dog.  Sitting in your lap or preferably on your body is something he does all the time.  He is now a big boy that weighs a lot.  His large body size makes it impossible for us to weigh him on our large mat floor scales because a part of him is always off the scale.  When we attempt to get him to sit on the scales for a treat, he decides he would rather lay on the scales, so half of his body is now off the scales.

As you can see, Luke is running the show at Noah's Arks Rescue when it comes to anything that has to do with him.   We adore this Big Goofball, and he knows it which is why he gets away with so much.  It brings a smile to our face every time streaks across the Training Room looking for another stuffed toy to pile on top of all the other stuffed toys he already has.

He sticks that big head of his into a large ottoman that holds training toys and searches until he finds something to add to his pile of goodies.   His expression is priceless when he can't see anything soft and fluffy.   He starts to talk to us and is basically saying that we are not doing our job since he came up empty-mouthed.

Luke will get to meet Derrick Campana for the first time this Monday at NAR Rehab Center. His casting will be done by Derrick to make sure he has a clear understanding of Luke's limitations and what Luke can already do with his partial leg which is a lot.  Now that the infection is gone, we are not planning on removing Luke's leg even if the prosthetic does not work.  Derrick is known for his ability to make Magic happen when it comes to the animals he works with
.
We are looking forward to seeing Luke run around on all fours once the prosthetic has been made. The process usually takes about a month to complete and will require several more visits to get it fitted properly.  In the meantime, Luke is gaining muscle mass by running and taking lots of long walks. When he gets tired, he sits down and rests for a few minutes and then is off running and playing again.  We are amazed at how strong his other leg has gotten since he has been doing running around.  He has perfect, beautiful form and uses the muscles in his half leg as if the leg is whole.

Luke will also begin his first round of heartworm treatment with his Cardiologist, Dr. Sophy Jesty at CVRC.  During that time, he will have all of his blood values taken and will be given more iron if he is still not in the normal range.   Luke will remain in the hospital during his procedures to make sure he does not have any adverse reactions.

Lots of great progress has been made with this special boy.  This next week is going to be all about getting him fitted for his prosthetic and treated for his Heartworm Disease.  We will do another update once Derrick has completed his process.  Thanks for caring and making his Journey to Heal and find Love, possible.  We greatly appreciate your love and support for our Gentle Giant.