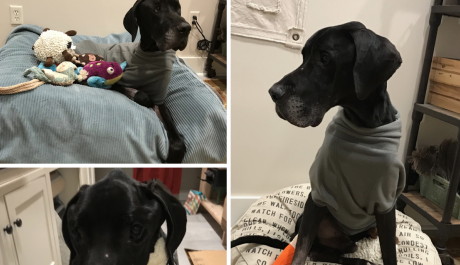 I so appreciate everyone's patience on waiting for the update on Luke.  A lot of results have come back, and his antibiotics have been adjusted.  The new medicines he was put on have been working because his leg wound has begun to granulate and has delicate, viable tissue with lots of proper blood flow.

The other area that was a big concern was his nasal passage and respiratory system.  We seem to have resolved the discharge he was having with his nasal wash and the new antibiotics.  He had a bloody discharge for one day from the procedure that resolved quickly.  Dr. Welch believes he had a foreign body that had been lodged in his nasal cavity at the back of his palate.  His body reacted to the foreign body with an inflammatory response that soon became infected.

I have been talking to lots of prosthetic companies since Luke's infection on his leg has been improving.   We have one individual we have spoken to that believes he can do a prosthetic for Luke.  We have to close the area around the bone before a prosthetic can be made. Luke will be having surgery on Wednesday at a new Hospital.   We are not going to post the name of the hospital since so many people have been calling the hospitals and disrupting their normal practice.   We will post an update once he has had his surgery.

We have over 200 applications for people wanting to adopt Luke.  Once Luke has healed, we will then go over all of the applications and pick the best candidate based on how Luke is doing.   Please, feel free to fill out an application if you would like to be added to the list.

Luke has been hanging out with me in my office. He is so tall that he can reach things that normal dogs cannot.  The Dog Christmas Tree Topper was the first thing he decided should be a play toy.   Luke loves stuffed animals and is allowed to have some since we are no longer worried about him eating the stuffing.    He loves having them piled around him when he is sleeping and acts more like a Lab with one always in his mouth.

The best news of all is Luke is finally gaining weight, and we are past the danger of him developing Re-Feeding Syndrome.  He is now eating eight cups of concentrated food daily that is increased weekly.  It will only be a matter of time before we begin to see a significant difference in his body mass.   Luke is a very tall Great Dane and is going to be massive when he fully recovers.

He is the ultimate Gentle Giant that wants nothing more than to be near you or in your lap.  I was exhausted the other day when I was looking after him in my office.  I decided to put my head down for a second on the floor next to him when an hour later I was awakened with Luke snoring on top of me.  He had curled up in the perfect spoon position with his bad leg over my legs and his front leg over my chest with his head on my shoulder.  At that moment, it suddenly hit me how horrifying it had to have been for him to have been tied outside with no food or water suffering.

I don't believe Luke ate his leg to survive.  I believe he chewed his leg off to free himself from the cable that he was tied to. I also think the cable had been on for so long that it had damaged his leg and had swollen around the cable cutting off the circulation.   The area where his leg was removed was smooth with clean edges.  That tells me, he chewed a leg that had become damaged and painful from the cable to get rid of the pain and to free himself.

Chewing a leg off is not an easy thing to do.  Poor Luke had to have been beyond desperate to have done such an act.   All of our tests are proving he can eat under normal conditions without any issues.  He was tied up and abandoned with no thought for his well-being.  The people that did this to him also have children.  I hope they were not around to see the kind of abuse that Luke endured.  Luke was in this state for quite a long time to have lost as much weight as he did.

Luke is safe and loved and acts like he never endured all that he has been through.   He has started to extend his wounded limb when he bends down and when he walks.   When he first arrived his partial leg was pulled up next to his body.   I assume that was to protect it, but now that his leg is healing, he is comfortable moving it around.   He will need muscle mass for the prosthetic to work.  We are working on him having that when the time comes.   Thanks for caring about this special boy.