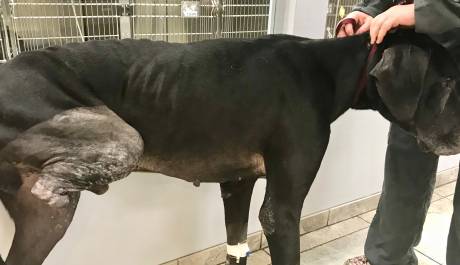 I so appreciate everyone's patience when it comes to dear Luke.  We have been very hopeful over the last month only to have our hopes shattered by this terrible infection.  Luke had his surgery late Thursday evening.  Because he had an active infection that had been identified, he had to be the last procedure of the day in the Surgical Center.

Surgical ER facilities take extra care when they know they are dealing with an infection that could potentially cross from one patient to the next.   There are normal cleaning precautions done between each surgery.   At the end of the day, extra precautions are done to make sure the area is sterilized and ready for operation the next day.

The Pseudomonas Infection Luke had has been a Nightmare to get rid of.  We have tackled it internally and externally to give him the best possible chance.  Our ultimate goal was to save the remainder of his leg so he could have a prosthetic made.    When Luke went into surgery, he still had the infection, but it was under control and had not spread any further up his leg.

Thousands of dollars were spent with the extra care that had to be taken with the bandage changes.  We pulled out all the stops and spared nothing on this boy.   If something did not work, we brought in other medications and unique honey to fight the infection.   We were relentless with this, and our hope is, it will pay off for Luke.

Dr. Jennifer Au did Luke's Surgery.  She removed several inches of the damaged bone and then pulled back as much viable tissue and muscle that was healthy and used that to close the wound.  Dr. Au saved as much skin as possible in case we had to go back in and remove more of the bone or tissue because of infection.  You can see in the pictures the ripples of skin around his stump.

Luke was also neutered during the procedure.  His massive Crown Jewels are now Legends in his Storybook. As of this morning, Luke has minimal swelling or discharge and is not having any discomfort.  He is acting like his usual fun-loving self and will be able to come back to our Rehab Facility to heal.

We have chosen Derrick Campana at Animal Ortho Care to make Luke's prosthetic.  Once Luke has healed from his surgery, we will fly Derrick down so he can determine the best way to make a limb for this special boy.  Dr. Jennifer Au at CVRC will be working with him on this process.  We are feeling good about Luke being able to use a prosthetic leg.   Only time and Luke will determine if this is possible.    A prosthetic is our ultimate goal.

We did not post for Donations for Luke's surgery earlier because we were not sure if it could be done with the infection he still had.  We have now done the operation and are making plans for his prosthetic.  Any support is greatly appreciated.